Showing posts from April, 2008
Show all

April 29, 2008
IN his speech during the opening of the 8th Cebu Interclub, PFF president Mari Martinez assured the new CebuFA officials of more aid.

Among the aid Martinez promised were coaching and referees courses exclusively for CebuFa.

"We will wait for the advise for the cebu fa, for the refree and the coaching to conduct here for three days," Martinez said.

Once the new Aboitiz field is also up and running, Martinez also promised to have an international tournament in Cebu, involving the 40-above teams of Southeast Asian clubs and countries.

He also said that the AFC will have their experts go around the country to look at and eventually design grassroots development program which will be in line with Vision Asia.
1 comment
Read more

With eight of its players named to the Cebu All-Stars, which lost 0-6 to the RP national team last Sunday, Pinoysoccer.com could have showed up minus a keeper, a defender or two to make yesterday’s game against Inter Lapu-Lapu more interesting.

Instead, the team, led by Oliver Colina, Eleazar Toledo, Lemar Baunsit and Kim Relucio among others, only needed 10 minutes to open the floodgates.

April 28, 2008
The match that was more than two hours late was worth the wait.

In their first match in Cebu since the national team still donned the tight kits, the Azkals took Cebu's best footballers to school, 6-0, in front of a sizeable crowd at the University of San Carlos-Technological Center.

Though he scored three of the six goals and had an assist on the first, Phil Younghusband showed a bit of rust in his first game in Cebu.  He went left, when a teammate passed right, he was two or three steps behind in some of the passes.

Arnie Pasenabo, who used to play for the Carmen Boys, also had a great game playing the provider from right flank, while another former Carmen boy, Julius Acre had the best chance among both teams from a free kick, with his shot just inches high.

Though they lost 6-0, the Cebu All Stars have nothing to be ashamed about, their defense managed to hold the RP team scoreless in the first 20 to 30 minutes, showing the RP team needs to fine-tune their offense and finishing tou…
Post a Comment
Read more

The Department of Education "killers"

April 27, 2008
IF they can't kill you with their schedule, it seems the Department of Education's Palarong Pambansa is ready with another hired gun, "the officials."

Afterwards, when Ceniza wanted to file a protest, not against the opposing team but against the official, he was told by the tournament manager, "we have the best referees in the Philippines."

April 26, 2008
The high school team has just defeated Davao, 2-1, to advance to the finals against West Visayas.  Barring any hitches from the officials, this could be an interesting final.

The elementary squad will play NCR again in the final, a team they beat 4-1, in their early meeting. Cebu City got to the final after the Pampanga squad failed to show up.
3 comments
Read more

The Charlie and Mari show

April 23, 2008
I HOPE Pinoysoccer.com had it wrong (or had it incomplete) when they reported that PFF president Mari Martinez will severely punish collegiate teams who will join Charlie Cojuangco’s stupid tournament next month.

Why severely punish those who got invited to the bastard ball Mr. President, why don’t you go for those who is organizing the ball?

Collegiate teams, because of the lack of tournaments in the country, would grab any chance that would have them competing against the champions of the other areas, what with the failure of the PFF, or any organization for that matter, to have a tournament that pits the best teams in the country.

Why not NOFA?  Why not punish Charlie, Mari?

The Charlie and Mari show.

Charlie, pissed that he is that Bacolod—the place where the national team should be playing—got left out in hosting the meet, wants to play spoil sport, not unlike that kindergarten KSP who would go out on his way to get noticed, soiled shorts be damned.

After victories up north, the Cebu International School dragons are inching their way down south, winning the Del Monte Football Cup against a familiar foe last April 12 in Bukidnon.

Coached by Eleazer Toledo, the boys defeated Don Bosco Technological Center, 3-2, in the final to take the Boys 12 title.

Here's the report from Sun.Star

April 15, 2008
In the business of sports, I coined the then infamous term of christianizing, the common practice when a reporter, who does his or her job, writes his or her stories, then only to have someone collect from the source, "You got your story, pay up (And no, this is not about DJ Montano, though he must pay up)

Or, during a coverage, when every reporter is supposed to submit a story, somebody goes to the event organizer and collects the payment "so the reporters will write a story."

You've been christianized, I always told them, or in some instances, I or we say, "Na-christianize mi."

There is another term I will introduce. It's CHARLIED, and the honor goes to the president of NOFA.

NOFA, in all it's brilliance and love for football for this country,  is organizing a tournament for the best collegiate teams--you know, the major source of players for the national teams--the same week the national team will be playing. 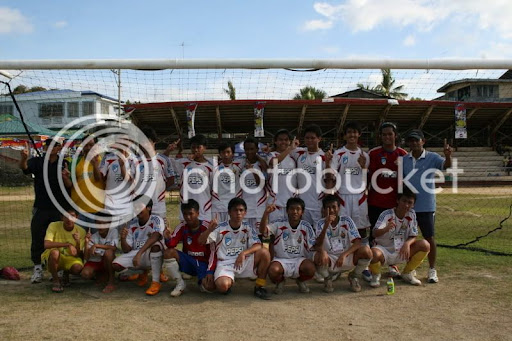 Cebu City stayed undefeated in the Central Visayas Regional Athletic Association for a return slot to the Palarong Pambansa.

The team, coach by Mario Ceniza, is now in Palawan to prepare for their hunt for the Palaro title. The games starts next week.

All pics courtesy of the Dr. JP (just click on the more button to view the pics)

April 13, 2008
USJ-R lost in the semifinals of the Prisaa, the boys are in Palawan for the Palaro, which will start a week from now.

Uptwon FC is organizing a two-day festival at UP on April 19 and 20, the Inter Club wants to have a game between Cebu's best and the RP team, Manfred Schuwerk is meeting with the Cebu referees on Monday.

And from the chat box, European Chamber is holding a festival at CIS.

That's it for now, ever since I got this muscle strain, which limited my time at the keyboard, typing more than a few words has been tough.
Post a Comment
Read more

April 10, 2008
Here are the different heads for the CebuFa committees:

Richard Montayre for the Coaches Committee; Eleazer Toledo for Tournaments, Manfred Schuwerk for the Referees, Rafi Musni for Youth, Tony Moraza for Legal, Adonis Quitoy for Sports Development (I didn't know they have one), and surprise, surprise, the lone lady in the board, Rachel Genco gets the Women's committee.

(Bro. Mari and Ricky Dakay didn't get any committee?)

Here are a few unsolicited advice for the new heads:

For Richard: To hold AFC, not just PFF, seminars for coaches. To get them to respect simple rules like the deadline.  Coaches love to bawl, question, scream and raise hell just because they want to, it would be nice if they would get to acknowledge deadlines.

For Elying: More tournaments, and the festivals don't count.

For Manfred: Discipline the referees, impose a merit system,  or for starters, tell referees, not to coach a team, when they are WEARING a referee's uniform during festivals.

April 01, 2008
Some six months from now, the Cebu City Sports Center will be no more.

With its football field resembling a beach, and its rubber oval getting as "rideable" as Hawaii's waves, the Cebu City government will embark on a 35-million program--not to upgrade the 14-year-old edifice--but to construct a 20-story parking area right in the heart of the city.

Because of the worsening traffic situation in Cebu City make the already narrow streets too narrow, with cars parking all over the place, the new Cebu City Parking Area is expected to get swamped as parking will be banned all over downtown Cebu.

April 01, 2008
Philippine Football Federation president Mari Martinez has stepped down from his post, just less than six months after winning a hotly-contested election against Ed Formoso and will start a new job with FIFA.

Martinez, 53, is expected to announce his formal resignation today.

"It is with deep trepidation that I tender my resignation as the president of this wonderful organization.  The previous four months have been a wonderful ride," said a prepared statement from Martinez that was to be distributed to the different media outlets today but was leaked to football.cebunetwork.com.