Showing posts from December, 2005
Show all

December 19, 2005
I have a question for you people...Which team was able to beat Hiroshi this year? Remember Hiroshi has an undefeated season. 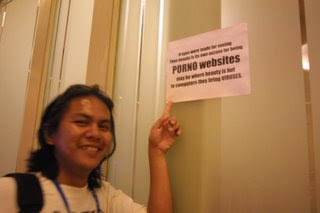 Notice to the general public...this person is on extended vacation (will have fun in Cagayan, Davao and finally in Polomolok South Cotabato -- his hometown) and will be incapable of making any stories -- football or otherwise for the rest of year. He will be incummnicado for the next two weeks and will not have internet access either (by choice) 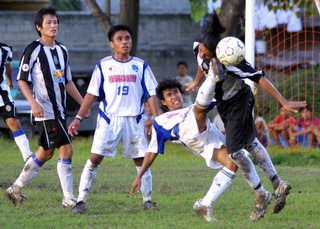 It was fitting end to a tough season, as both teams finished with out a loss, and with identical 16 points, on a 5-1 win-draw card.

However, Hiroshi FC got the crown by the skin of its teeth – a single goal.

Workhorse Junard Aguilar took advantage of a defensive miscommunication in the eighth minute to score the first goal past Jesus Singson for a 1-0 lead. However, their joy was cut short after Ranuel Colina tapped in a rebound in the 13th.

Aguilar again connected in the 24th before Ayabe Hayato's perfectly taken free kick in the 28th blasted past Frederick Alazas to level the match.

December 15, 2005
This weekend promises to be a slam bang affair as the Aboitiz 15 Under and the Men's League comes to a close with thrilling matches at the San Roque Parish football field.

In Saturday, Don Bosco College and Blessed John XIII seminary try to salvage some pride when they face off with each other in the U15 battle for third, before Hiroshi takes on Paref-Springdale in the titular show down.

Early in the elimination, BJS squeaked past DBC, 1-0, while Springdale also scored the same win over Hiroshi.

Sunday also offers a marquee match up as Hiroshi FC tangles with Crazy Horse FC in the men's league -- with the champion getting to represent Cebu in the regional men's open next year.

Both Hiroshi and Crazy Horse are tied on top with 15 points on five wins and a +29 goal difference.

Question now is, what happens if the teams draw?
3 comments
Read more

Match fixing in the Sea Games

December 14, 2005
The Southeast Asian Games is long over, Vietnam finished second again to Thailand. However, all is not over for Vietnam as the team and get this, a sportswriter, is being investigated for Match Fixing

Here's a report from the Associated Press

HANOI, Vietnam -- Four members of the Vietnam's national soccer team will be questioned by police over allegations of match-fixing during this month's Southeast Asian Games in the Philippines, local media reported Tuesday.

The four will be required to show up for questioning Wednesday, confirmed a ministry official who declined to give his name. No further details were given. The players are accused of receiving tens of thousands of dollars in payments from Vietnamese gamblers to fix matches against Myanmar an…
Post a Comment
Read more

December 13, 2005
CEBU's premier football festival returns for another edition early next year with the 3rd Thirsty Cup at the Sacred Heart School-Jesuit field on Jan. 7 and 8.

The two-day fiesta is expected to attract the best age groups and senior teams in Cebu as they compete with each other in seven-a-side games.

Expected to fight it out in the tough senior division is defending champion Hiroshi FC, who claimed the first of its four titles this year in the 2nd Thirsty Cup. Crazy Horse FC, San Roque FC, and Queen City are also expected to give Hiroshi a run for their title.

On the other hand, teams from Silliman University and Foundation University in Dumaguete City are also expected to show up for the event.

Players from the University of St. La Salle in Bacolod City will also reinforce some Cebu teams in the women's division.

December 12, 2005
The first season of the Aboitiz League winds up this Sunday with Hiroshi taking on Crazy Horse FC -- the winner getting the right to represent Cebu in the regional finals.

The first few days of the Aboitiz League was a boring affair, with the top teams scoring easy routs.

If you were the CebuFA what changes would you inplement next year?
32 comments
Read more

CH and Hiroshi tied on top.

December 12, 2005
Here is the summary of goals for and against the two teams.
Results are based on the data forwarded by CebuFA

HIROSHI FC and Crazy Horse FC are gearing for a titular showdown after drubbing their respective foes yesterday in the Aboitiz League Division A at the San Roque Parish football field.

Both teams are undefeated in five matches and lead the standings with 15 points and 28 goals scored. If not for the costly mistake of Hiroshi's keeper in its first game, the team could have been number one in the league by just a goal.

In the first game, Rugmo Debra defeated Danao FC, 2-0, for its second win. Ian Cadampog and John Casayan scored in the 52nd and 68th to keep Rugmo in the top four with seven points. Danao is sixth with only three points and will be relegated to Division B next year.

December 11, 2005
From Sun.Star sports page regarding the UV Lancers decision not to join Prisaa basketball

The Green Lancers coach added that aside from the problems in scheduling, most of his players are still on vacation in their respective provinces, prompting them to forego the competition.

The Green Lancers, under Cabahug and assistant Al Solis, both former Philippines Basketball Association stars, failed to capture the national title last year after bowing to the crowd-backed host team Southern City Colleges of Region 9 in the do-or-die crossover semifinals in Zamboanga City.


Correct me if I'm wrong, classes are still on goin on right? They are still on vacation? Must be nice to earn a college degree that way
Post a Comment
Read more

December 10, 2005
IT may have been a month delayed but the win is still as sweet.

The match, which was supposed to be played last month, was moved to Sunday since CIS played in the Alaska Cup.

Emmanuel Cunningham scored both goals for CIS in the 7th in 29th minute while Karl Arcenas banged in the lone goal for Springdale.

Meanwhile the Aboitiz 15 Under final promises to be a slam bang affair after Hiroshi and Sprindale blanked separate foes to set up a grudge rematch. Hiroshi lost to Sprindale, 0-1, in the elimination round.

Last Sunday, Hiroshi scored three late goals in its 3-0 rout of Blessed John XXIII Seminary while Springdale got an early gift after DBC scored an own goal for its 3-0 win.
10 comments
Read more 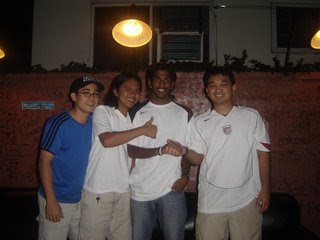 In Bacolod City, the place to go is Draft -- it is where sporty people and people in sports hang out, as shown by these photos. Of course, on second thought, we could have clobbered the Malaysian player...but hey, you win some, you lose some.

The only girl is futbolera_cinco, of USLS..They're coming for the Thirsty Cup..hopefully.
Post a Comment
Read more

December 05, 2005
BACOLOD CITY -- Thailand is simply on a class of its own -- winning its seventh straight Southeast Asian Games (Seag) football crown after whipping Vietnam, 3-0 in the finals Monday night at the Panaad Park and Stadium.

On the other hand, Malaysia defeated Indonesia, 1-0 in a hotly-contested battle for the bronze that had Indonesian coach Peter Withe storming the pitch after a disputed non-call by the referee.

It was the same referee who called the shots for the RP-Malaysia game.

According to a football volunteer, a fuming Withe stormed the official and didn't stop haranguing him until the official got to their room. After wards, Withe had to be stopped by officials from getting near the referee again.

Witnesses say that Malaysia committed two handballs in injury time inside their own penalty box that could have swayed the game in Indonesia's favor.

In the final, teeratep Winothai scored three goals to give Thailand's its seventh straigth title.
Post a Comment
Read more

December 03, 2005
Bacolod City -- Powerhouse Thailand goes for an unprecedented seventh straight title when they meet Vietnam in the final of the 23rd Southeast Asian Games.

For the bronze medal, Indonesia will play Malaysia.

Who will win? Will the Thais return triumphant or will Vietnam start a shift in the balance of power in the Seag?
Post a Comment
Read more 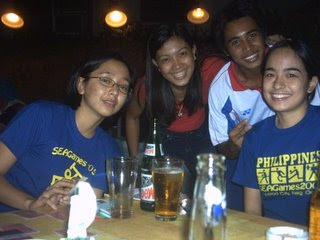 BACOLOD City -- The Philippines may have lost to Malaysia, 2-4, and its campaign in the 23rd Southeast Asian Games (Seag) prematurely ended, but that deosnt stop the fans from having a party.

Check out this photos.