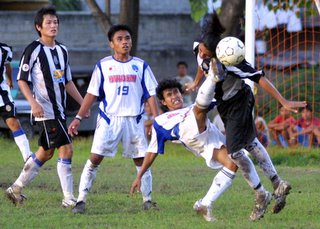 It was fitting end to a tough season, as both teams finished with out a loss, and with identical 16 points, on a 5-1 win-draw card.

However, Hiroshi FC got the crown by the skin of its teeth – a single goal.

Workhorse Junard Aguilar took advantage of a defensive miscommunication in the eighth minute to score the first goal past Jesus Singson for a 1-0 lead. However, their joy was cut short after Ranuel Colina tapped in a rebound in the 13th.

Aguilar again connected in the 24th before Ayabe Hayato's perfectly taken free kick in the 28th blasted past Frederick Alazas to level the match.

Hiroshi changed uniforms in the second half – going white after using blue jerseys in the first, but the changed seemed to have taken something from them as they were kept on the defense by Crazy Horse.

Former national mainstay Joshua Fegidero – playing against his teammates for Bacolod in the nationals open, Rocky GArciano and Jan Michael Flores of Hiroshi – found himself checked by Flores.

On the other hand, Oliver Colina, who trained for the national pool this year, had flashes of brilliance but his shot – including a volley – in the second half was stopped by Alazas.

Crazy Horse gave it all in the final minutes but they fell short as Hiroshi held on to the draw for the title and the right to represent Cebu in the Regional Men's Open next year.

"We are more prepared this year and the team is also stronger," Buot said. Last year, Hiroshi lost in the Regional Open and failed to qualify for the national finals.

Yesterday's championship also capped a brilliant season for Hiroshi – who won all their games this year.

It was the team's seventh title for the year after winning the Thirsty Cup, Shangrila Futsal tourney, the Aboitiz Cup and Aboitiz Champions League and the Cebu International School Friendship Cup and the CIFC Inter Club