Showing posts from December, 2007
Show all

DEFEENDING champion University of San Carlos (USC) booked a return to the final after a 5-0 lopsided win over the second ranked Universty of Southern Philippines-Foundation (USPF) in the Cebu Schools Athletic Foundation Inc. yesterday at the USC-TC football field.

USC, which finished the elimination round with two draws and two losses got on board with Pomposo Atillo in the ninth minute for an early 1-0 lead over USPF, which owned a 1-2-1 card in the elimination.

However, the real star of the show was Ryan Lim as he scored a hat trick in the 45th, 72nd and 78th minutes to seal the fate of USPF. Kyle Soriano of USC also had a goal in the 67th minute.

USPF’s Michael Diano and USC’s Melvin Elle and Cliff Bacolod were all booked with yellow cards.

In the second game of the semifinals former four-time champion University of San Jose-Recoletos (USJ-R) ran over the University of Cebu (UC), 2-0.

December 09, 2007
Before the whistle could be blown for the Cesafi semifinal games, it fizzled out.

The reason? The Cesafi commissioner's office has found that two players from UV, the No. 1 team, were ineligible to play.  Now that means UC, the last ranked team, get its spot in the semifinals.

Now there are a lot of intangibles here but here is one sure thing this whole episode shows, the Cesafi is all about basketball.

Basketball players go under the microscope, never mind they go off under technicalities, never mind they forgot the part of being a "student" of a student athlete, never mind they'd enroll in a masters program just to exploit the "maximum playing years."  No problem there, is it?  Everything is all ironed out before the first game, or the first jump ball…
Post a Comment
Read more 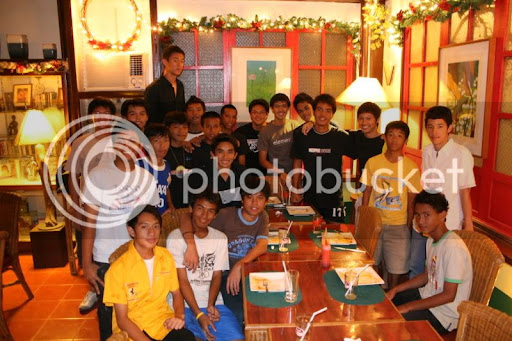 AFTER breaking the crap of each other (figuratively, of course) in the Cebu City Olympics finals, members of the Abellana National School and Paref Springdale football squads teamed up to devour plates full of delicacies and barrels of juice and drinks at Handuraw.

I hear, the winners footed the bill.

This could be a good tradition, and let those who get carded, NOT get any seconds.