Showing posts from September, 2014
Show all

September 29, 2014
LAST year, Gilas coach Chot Reyes was the toast of the basketball world, having guided the team to second place in the Fiba Asia championship and a slot to the World Cup for the first time in decades.

There were those who criticized him of his choices, for sure, but they were drowned by an adoring crowd ready to crown him as the messiah that would get us the long-sought gold medal in the Asian Games.

But in the World Cup of Basketball last August, more questions came and they became louder. 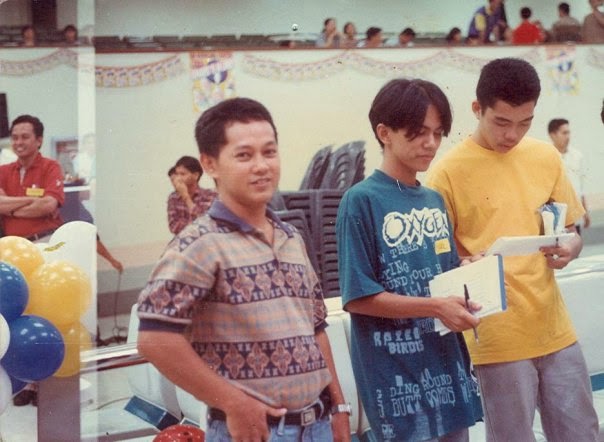 (This is my Fair Play column for Sun.Star Cebu's Sept. 27 edition)
WHEN I started in sports writing back in 1997, while splitting time as a sophomore at USC taking up BS Electronics and Communication Engineering, I never expected to be in this position now, heading the sports desk.

Back then—heck, rare is a sophomore engineering student who plans beyond the weekend binge—life was simple. I rushed to the office after school to file my stories, or during weekends, I’d go to the venues to cover my beat.

No Internet, no social media, no cell phones. You had to be there where the story happened.
(CIRCA 1997. That's me in the middle with from left Banat Sports Editor Yoyo Abayan and then correspondent now Freeman Sports Editor Manny Villaruel.)

September 25, 2014
(This is my Fair Play column for Sun.Star Cebu's Sept. 25 edition)
IT’S the semifinal round of the Cebu Schools Athletic Foundation Inc. football competition and the University of Southern Philippines Foundation is the No. 1 seed, a development that got me by surprise.

But thanks to an archaic competition that should have gone the way of the dodo, it might as well be USJ-R at first and USPF at fourth in this Cesafi football playoffs.

September 22, 2014
(This is my Fair Play column for Sun.Star Cebu's Sept. 22 issue)
Last Thursday, I met Chad Songalia, Milky Cañete and Neil Montesclaros--the men behind the Thirsty Cup--to discuss the details for another football tournament that they are handling.

This age group tournament that was first staged in 2012 after that historic Singapore vs. Philippines match will return for its third edition this year on Nov. 22 and 23, still at the Cebu City Sports Center.

Fair Play: Can UV hurdles this latest test of character?

September 20, 2014
(This is my Fair Play column for Sun.Star Cebu's Sept. 20 edition)
THAT semifinal loss to the University of San Carlos Warriors has got to be the lowest point in the University of the Visayas Lancers’ 14-year stint in the Cesafi, worse even than that loss to rivals Southwestern University Cobras when a few Lancers started rough-housing their foes.

What makes this worse is that a couple of UV players got in a fracas--not with the foes--but with each other. A first, I think, in the history of the league.

Crazy? Yes, but if the BPO football community in Cebu is successful, they are going to play 101 hours of football to break the Guinness record for the longest football match.

A search online shows there are two records for the longest football match, one is 33 hours for a full 11-a-side game and another is 53 hours for a five-on-five.

Fair Play: Why USC community should rally behind the Warriors

September 13, 2014
(This is my Fair Play column for Sun.Star Cebu's Sept. 13 edition)
WHEN I was still a correspondent in early 2000s, there were basically two questions that would start a long debate among colleagues as no one had a clear cut answer – how long is the UV Green Lancers’ win streak and how long is the USC Warriors losing streak?

Back then, covering the Cesafi basketball was as interesting as watching paint dry--UV would win all the games and the titles and all the Lancers need to do, it seems, is show up. On the other side of the coin, the USC Warriors would lose all games so badly that it was often suggested that the school drop the Warriors monicker.

I was a correspondent and a USC student at that time, and I’d always get ribbed by colleagues, “Kulata na sad imong San Carlos.”

Fair Play: The crazy rules on nationality in international sports

September 11, 2014
(This is my Fair Play column for Sun.Star Cebu's Sept. 11 issue)
FOR the Fiba World Cup, the former Brooklyn Nets center Andray Blatche was Filipino enough to represent the Philippines in basketball’s showcase event.

But weeks after leading the Philippines in scoring and in minutes played in the World Cup, the Olympic Council of Asia has disqualified the naturalized Filipino from playing in the Asian Games.

September 08, 2014
(This is my Fair Play column for Sun.Star Cebu's Sept. 8 issue)
WHEN I first saw the cast of teams in the Peace Cup, I knew defending the crown would be one difficult task. Myanmar, Palestine and Chinese Taipei were all invited, a vast improvement from last year’s cast which seemed pre-selected to assure the Philippines keep the crown.

This year, the organizers wanted a real test for the Philippine team in preparation for the Suzuki Cup and it got what they wished for, of course, minus the silverware.

September 06, 2014
(This is my Fair Play column for Sun.Star Cebu's Sept. 6 issue)
IF YOU were not in front of a TV last Wednesday, then you just missed one of the biggest nights in Philippine sports. It was the night Gilas Pilipinas faced Puerto Rico in the Fiba World Cup in Spain and the night that the Azkals took on Chinese Taipei in the Peace Cup.

If you were in front of the TV last Wednesday and on Thursday were shopping for a new one, then you must be a downtown Cebu resident. Gilas and Puerto Rico were tied at 70 when the cable signal was lost and throwing the remote at the TV is a justifiable act.

September 04, 2014
(UPDATE:This Fair Play column for Sun.Star Cebu's Sept. 4 edition was written before the Gilas vs. Puerto Rico and Azkals vs. Chinese Taipei matches. Gilas lost and the Azkals won.  It still was a magical and unforgettable night for Philippine sport.)

FOR some misguided passionate fans, you are either a basketball or football fan. I’ve seen some arguments over social media about such silly things.

I don’t really mind them as they are but a few. It’s just that sometimes, the argument spills over into the national team and folks point out why this team should have more support over that team.

Well, the truth is, when it comes to the national team--of any sport--it doesn’t matter if you’re a fan or not, you support the team because the players are playing for the flag.