Showing posts from October, 2009
Show all

Fair Play: The proud parents of the 'others'

Their son just made it to the RP team 19-Under football team.

Doc Joel once told me that he takes care of the sports activities, while his wife is in charge of their kids’ studies.

October 30, 2009
ANOTHER Cebuano made it to the RP youth football team, making him the third to see action for the country this year.

Goalkeeper Paolo Pascual of the University of San Carlos (USC) made the cut and will join the Philippine team in the Asian Football Championships 19-Under Group G eliminations in China.

Despite joining the training camp late, Pascual, who was recommended to the squad by his teammates during his stint in the Palarong Pambansa in high school, will be the starting keeper of the team.

That’s what a few disgruntled parents hollered at the officials during the Milo Little Olympics secondary football finals between Visayas and Mindanao.

Their complaint? Their perceived bias of the officials for the Cebu teams.

It was from the South African embassy, reminding us that the accreditation window for media men who want to cover the 2010 World Cup is about to close.

I’d probably file mine before the window closes.

October 26, 2009
LAST year, the Abellana National School football players were on the outside looking in, barred from joining the Milo Little Olympics.

During the awarding ceremony for football yesterday, all eyes were on them—the champions of the first Milo Little Olympics national finals.

Fair Play: That is all folks

October 24, 2009
BEING a Philippine football fan, it seems, is a bit like being a runner.

You have to continually punish yourself for your love of the sport.

The only difference is, in running, you know that you’d eventually reach your goal before you die.

Fair Play: Football on the greatest show on air

October 21, 2009
I GOT a couple of queries through email recently, both from expats concerning their favorite sports—football.

The English and American variety.

Though both were about different sports, they share the same sentiment—for them, there isn’t enough football in local cable channels.

October 19, 2009
WE GOT so serious the past few issues it’s killin’ my two running companions’ creative juices.

Suspension this, suspension that and before we know it, we’d be in suspended animation.

Whew, let’s take a break, shall we?

PAREF-Springdale took the solo lead in Group A of the Boys 17 division as they clinched their third victory in the 12th Aboitiz Football Cup with a lopsided win over Guiseppe yesterday at the Aboitiz Sports field.

Paref-Springdale trampled Guiseppe, 21-0, and remained undefeated in the tournament.

Forward Bran Go was the man of the match as he logged six goals for Paref-Springdale, while Mikel Alazas, Bernard Montayre and Jon Young played the supporting cast for their ace scorer as they added three goals each.

What Southwestern University athletic director Ryan Aznar did wasn’t one of them.

Three players from SWU were suspended for playing in another event. Aznar thought they shouldn’t be.

Fair Play: The sad case of Joy and Mary

October 14, 2009
POLITICIANS who fight for sports development are a good thing.

Politicians who bring their fighting in sports are not.

The mess that Joy Young and Mary Ann delos Santos are in is not only comical, but also disappointing.

October 13, 2009
EMPLOYEES from the BPO industries and those from Mactan will get a chance to stoke their competitive fire in the 1st Home Sweet Home Spa Football Festival at the San Roque fields next Sunday.

The event, which will have teams playing 9-aside matches in 10-minute halves, will have the men’s and women’s divisions.

Teams who have signed up so far for this Sunday’s event are Convergys, Sykes, Aegis People Support, Teletech, Lexmark and NCR.

These teams also join open competitions organized by other groups but usually fare badly when they face the more established clubs or school-based teams.

Since they want to play in a more level playing field, football players from the competiting companies have decided to organize themselves and hold a tournament for “weekend” warriors.

They will play a single round robin with the top teams advancing to the knockout stage.
Post a Comment
Read more

Fair Play: Me, myself and migraine at the Holiday Spa

October 12, 2009
MAYBE because of its nature, running, kinda makes you schizophrenic.

You mean like this? Reallyreallyreally?
Hey, you’re still here?

When you start struggling, your friends pop up. You know, friends whom you listen to when you’re alone and you debate between drinking and working.

PAREF-Springdale of Unit 6 retained its title in the secondary division football tournament of the Cebu City Olympics after a come-from-behind penalty shootout victory over Abellana National School (ANS) of Unit 9 yesterday at the Cebu City Sports Complex.

October 10, 2009
I REALLY thought the Cesafi provision on a player’s residency requirement was vague—what with the confusion on its interpretation and all.

A gray area, they call it. But, I think there are no gray areas in it. 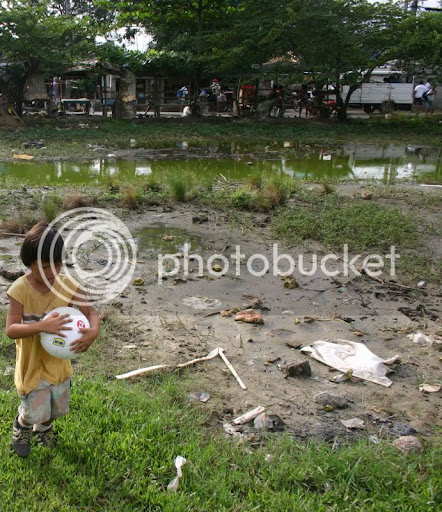 AT THE crack of dawn in one small patch of grass that barely qualifies for a football pitch—or a playground even—a group of youngsters start their thrice-weekly grind of football drills.


While most of their schoolmates are just waking up, they are off greeting the dawn as they warm up for the day’s exercise. And as the rest of the students troop to school, members of the football team—from six-year-olds to 12-year-olds—toil under coaches Jun Santillan, Elmer Yonting, Eric Colina, Nick Sanchez and Mario Ceniza, who serves as a consultant, for the day’s final workout.

October 07, 2009
WALKING out in a sports event is a big mistake, except maybe when teams are trying to prevent an escalation of violence.

Only sore losers, those who want to win at all costs, or people with the mentality of a toddler walk out. 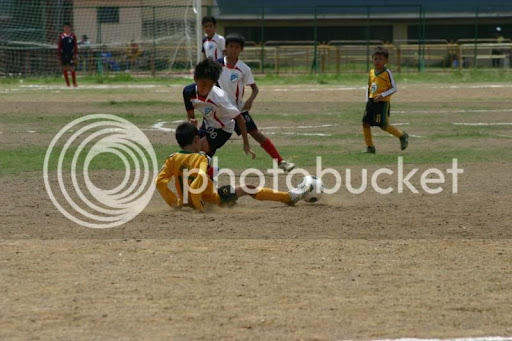 Graeme Mackinnon, the Ceburoo from Down Under dropped by Cebu and took some great photos during the Cebu City Olympics.

DEFENDING champions University of San Jose- Recoletos (USJR) wasn’t in its usual dominant form but it still won, 1-0 against the University of the Visayas (UV) in the semifinal round of the Cebu Schools Athletic Foundation Inc. at the Aboitiz Sports Field yesterday.

After a scoreless first half USJ-R had two chances to score in the second but missed—a header that was way off and free kick that hit the bar.

However, USJ-R delivered in its third attempt. Robert Mamac penetrated from the left side and connected with Jiffer Siaboc for a header in the 69th.

UV still had ample time to equalize but it couldn’t hit the mark.

Despite the win, USJ-R coach Mario Ugarte wasn’t impressed by his team’s performance.

“Their performance was not too well. They weren’t passing the way they did but the important thing is they won,” Ugarte told Sun.Star Cebu “They should impro…
1 comment
Read more

Fair Play: The real No. 1 returns

Save for the aborted return of Michael Schumacher and the circus regarding Diego Maradona, two other stars have made successful returns to their sports. 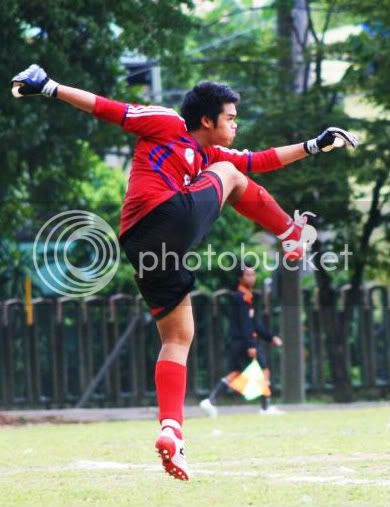 AFTER three others got the chance this year, another Cebuano will get his shot at donning the RP football team’s colors.

University of San Carlos goalkeeper Paolo Pascual was invited to join the national training camp in Manila by goalkeeping coach Noel Marcaida and could see action for RP in the AFC U19 Championships in China next month.

All pics courtesy of G. Rodriguez.

Mike's Note: There are more pics but I just realized after uploading this one that the pics are too small.  Will upload this and and the rest of the pics once they are also re-uploaded in a bigger size. :-)