Showing posts from November, 2006
Show all

November 27, 2006
FAVORITES Queen City United and Crazy Horse FC tallied their second wins in similar fashion after the second round of the Aboitiz Premier League at the San Roque Parish football field.

Former University of San Jose-Recoletos Kim Relucio slipped into his familiar role as a striker to put Crazy Horse FC up 1-0 in the 37th.

Left unchecked inside the box, Relucio simply tapped in the cross past Edelio Ybañez for a 1-0 lead in the half.

In the second half, Relucio slipped back to his defensive role but there was no shortage of firepower on the offensive end as Mitsuo Tsunakiri blasted in a 25-yarder for a 2-0 lead in the 50th before Rodolphe Lina made it 3-0 in the 65th.

In the 70th, Albert Nangkil drove from left flank and slipped past the midfield and the defense to bang in Crazy Horse’s final count. 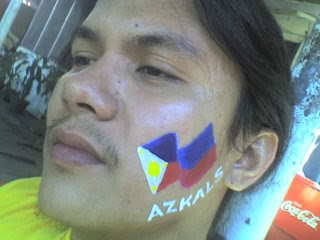 AFTER posting its best performance in a tournament in more than 50 years the Philippine national team improved 11 rungs in the latest rankings released by FIFA.

The Philippines, which scored three wins in the Asean Football Federation Championships Qualifying tournament in Bacolod City last week, moved to 184th in the world from its previous rank of 195.

In a list posted at Fifa.com, the Philippines earned 34 points in November and 26 points in October.

Still the jump didn’t change much the picture of Asean Football, which will hold its Championship round early next year, as the Philippines only bested newcomer Timor Leste in the ranks of Asean countries.

Laos, which topped the Bacolod tournament, made the biggest jump to 157th place, up from 183, while 2004 Tiger Cup champion Singapore is still the top Asean country at 116th.

Thailand, which disbanded its entire national squad a few weeks ago, is at 125th, while Indonesia is 144th and Myanmar at 150th.

November 17, 2006
Bacolod City---The Philippines will take on Cambodia today in an all important battle for the final two spots in the Asean Football Federation Championships.

The match will be aired live on Solar Sports, so mark the time. 4:20 p.m. (Bacolod time, I've discovered, is 10 minutes ahead of Cebu)

P.S.
There is only one PC at the media center (or is it the medium center) so I wasn't able to update this blog.
Post a Comment
Read more

November 12, 2006
THE Philippines will slip into its familiar role as the underdog when it takes on the top-ranked Laos in today’s opening game of the Asean Football Federation (AFF) Championships-Qualifying Round at the Panaad Park and Stadium in Bacolod City.

However, the team, ranked 195th in the world and last among the five countries, will have something it didn’t have in the previous AFF Championships, then known as the Tiger Cup——hometown support.

The other teams are from Cambodia, East Timor and Brunei.

In last year’s Southeast Asian Games, a sea of blue shirts packed the Panaad Stadium to cheer the team—which the fans have called Azkals—while some climbed on trees and atop the parked fire truck near the stadium gates.

The team also put on a good show for the fans, holding Thailand well before a late goal allowed a 1-0 win and beating Cambodia, 4-2, for the first SEA Games win in 14 years.

This year, the Philippine Football Federation is asking again for support for the team and for the fans to …
2 comments
Read more

THE Cebu International School (CIS) and PaBol Football Club barged into the quarterfinal round of the sought-after Girls 16 Division of 11th Alaska Cup Football Festival yesterday at the Ayala Alabang Country Club Fields.

CIS and PaBol both enter the final eight after making it to the top two of their respective brackets. CIS ended the elimination round with a 3-1 card, while PaBol finished with a 2-1-1 slate.

The Girls 16 title is a hot item as the winner will represent the country in the Gothia Cup in Sweden next year. The organizers will shoulder all expenses for the squad.

The other teams fielded by CIS, on the other hand, will co…
Post a Comment
Read more

November 12, 2006
I've been remiss with updating this blog because of a lot of things. Hope I can make up for that when the AFF Championships Qualifying Round starts in Bacolod.
Post a Comment
Read more

November 06, 2006
Hello folks, just caught up with the comments (with some, not all) with the "Mother nature plays spoilsport" entry.

I erased most of the text messages I got, so, here are so far the age groups confirmed or that has been played out in the 2006 Cebu football season. (And I ain't talking about them festivals, may my elementary English teacher, forgive me)

In the box:
Men's Open

Opinions? Conjectures? Please leave it on the other threads, here, I want simple statements.

Either it will be:

There is an Aboitiz Cup for this age group this year.

There is no Aboitiz Cup for this age group this year.

P.S.
Bay, I am one up on you. You have nine bucks on google ads. Me? after 17 months of this blog, I got 14, so, in the next eight years or so, I'll have me check (forgive me again teach)
6 comments
Read more

November 04, 2006
Since its been awhile that I've had a visit from the spammers/comments, I'll disable the need to moderate comments in the blog. Once they return, I'll activate it again.