Showing posts from March, 2015
Show all

March 16, 2015
(This is my Fair Play column for Sun.Star Cebu's March 16 edition)
A COUPLE of years ago, the Cebu City Sports Commission launched an ambitious project aimed at sending a beach volleyball team to the Olympics, powered by the belief that if you give a local players the chance, they can make it.

But such is the challenge of being an athlete in a Third World country that the CCSC is learning, albeit late, that even beliefs, dreams or the honor of playing for the flag isn’t enough.

Fair Play: Invest in your child's future this summer

March 16, 2015
(This is my Fair Play column for Sun.Star Cebu's March 14 edition)
AS you can tell from the weather, summer is almost here. With school out and a lot of idle time in their hands, summer is the perfect time to get your kids into sports.

Sweating it out and playing under the sun may turn them a few shades darker, but that’s a whole lot better than them accidentally clicking a fifty shades of grey parody on YouTube, right? Try explaining that to your kid.

Of course, skeptics will ask--what? The over-hyped and much-marketed Azkals need money? Don’t they have TV shows for that or that multi-million peso deal with ABS CBN?

March 11, 2015
(This is my Fair Play column for Sun.Star Cebu's March 11 edition)
YOU have to excuse my friend Raffy Musni if he seems to be walking on a high lately. Not only did his son's team beat archrival Don Bosco Technological Center for the Cviraa crown impressively, 23 players of the Cebu elite teams were also called up for the national training squad.

And along the way, ever the jokester, he also gets to rib the DBTC parents who are part of the Cebu Football Association.

March 11, 2015
(This is my Fair Play column for Sun.Star Cebu's March 8 edition)
WHILE reading through the posts online of the secondary football results of the Central Visayas Regional Athletic Association, and seeing how the Don Bosco-led Cebu City team was dominating the opposition, I told my friend coach Ray Calo that I was willing to wager a few cold ones for his team.

Luckily, no one took it because the next thing I know, Mandaue City, represented by Sacred Heart School-Ateneo de Cebu plus some players from Canduman, brought Don Bosco back to earth with a humbling 3-1 defeat in the semifinals before blanking Dumaguete, 2-0, in the finals. 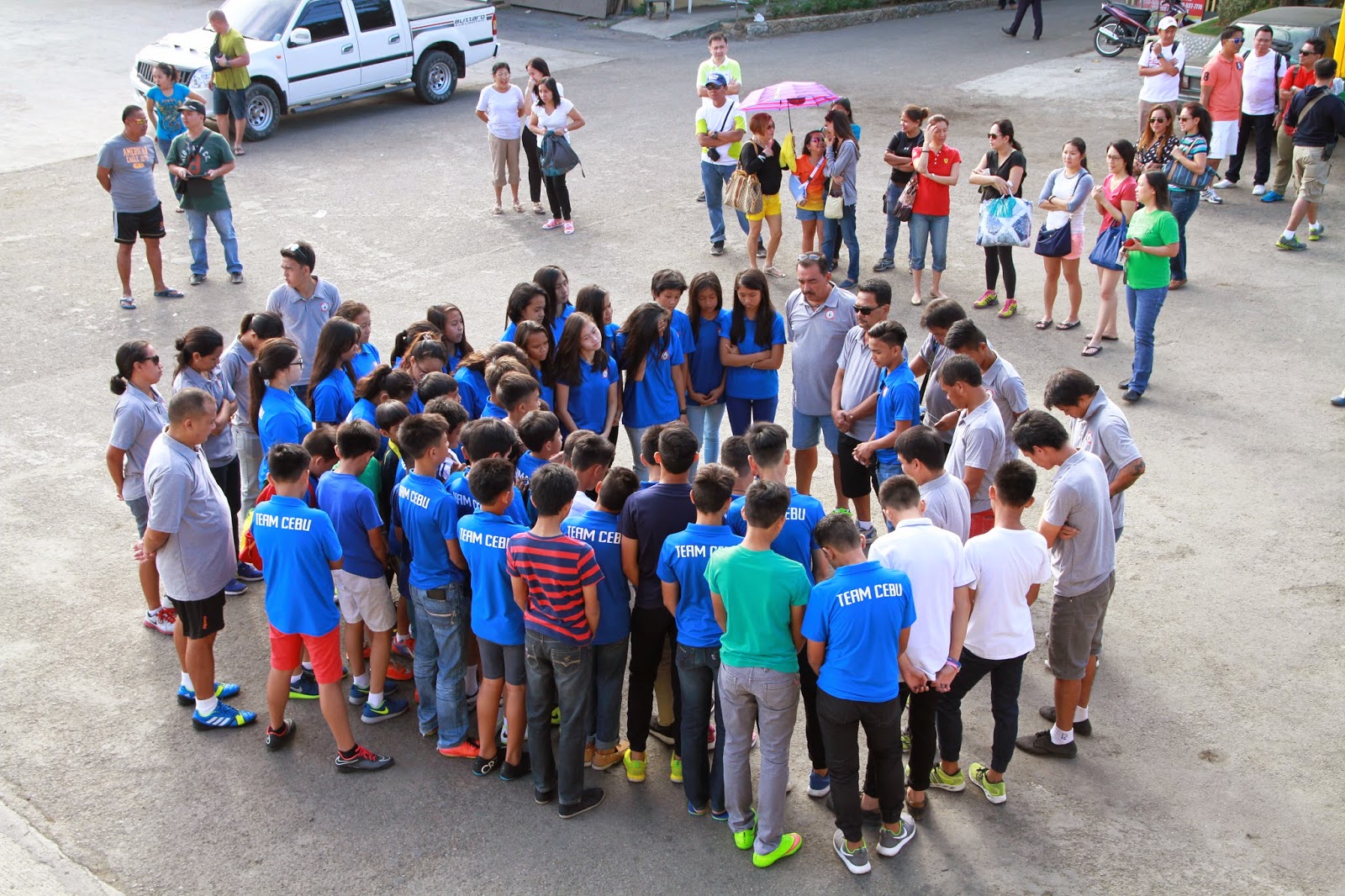 (This story came out in Sun.Star Cebu's March 7 edition)

WEEKS of hard work for some of Cebu’s best young footballers will finally be put to the test today as they join the Festival of Football in San Carlos City.

The Cebu Football Association started the tryouts for the Boys 12 and 14 and Girls 14-Under teams six weeks ago to identify the players who will represent Cebu in the Philippine Football Federation-organized meet.

Other FAs from the Visayas will also field teams and from the pool, they will select the representatives for the Visayas for the national youth squads.

March 05, 2015
(This is my Fair Play column for Sun.Star Cebu's March 5 edition)
SOMEDAY I’m going to run out of praises for the Cebu City Sports Commission. But not today, not now. Not while the group keeps on putting the “roots” in grassroots.

Consider the latest pet project of CCSC--a grassroots running program in the mountain barangays of Cebu City, a program inspired by a chance encounter CCSC chairman had with a Kenyan during a trip abroad.

Why put it up in the mountain barangays? Well, why not?

Fair Play: Perverts have no place in sports

March 05, 2015
(This is my Fair Play column for Sun.Star Cebu's March 4 edition)
FOR the second time this week, another coach landed in the news but not in the sports pages, accused of doing something that we can all live without.

Days after a basketball coach was slapped with child abuse charges for insulting a kid, a baseball coach was accused of molesting an 11-year-old.

The incident is fresh, so whether it's true or not is for the police to find out. But this is alarming as it happened in a Department of Education meet, when supervision of kids is crucial.

Fair Play: Tax break for Pacman? Are you nuts!

March 02, 2015
(This is my Fair Play column for Sun.Star Cebu's March 2 edition)
MANNY Pacquiao is entitled to a P3.5-billion take from the purse alone from his mega fight with Floyd Mayweather. After taxes of course, his trainers will get a cut from his payout, but aside from the purse, he’s entitled to his share of the US pay-per-view income, which is projected to break the record, and, from his previous deal with Bob Arum, he also has a cut in the pay-per-view income in the Philippines.

All-in-all, because of the Mayweather fight, he’d be a billionaire multiple times over.

Now tell me, do you think Manny Pacquiao deserves a tax exemption? Does he, let me unroll my eyes, deserve a tax break to inspire him in his training?