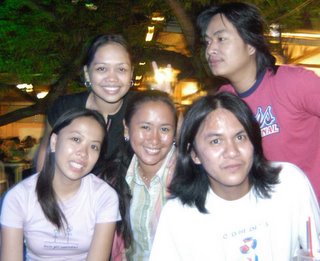 Starting today, Cebu football is one person short, one important (though she wouldn’t call herself that way) cog short – and no, it isn’t about another prima donna.

Sona Mae Povadora -- sports and football beat reporter of the Freeman – is leaving Cebu and The Freeman, to spread her wings on a broader horizon.

An STC graduate, a Freeman intern, correspondent and staff reporter, Sona is a regular fixture in football tournaments (among others).

Despite living in the far side of the city (try Talisay), she manages to be at the USC-TC field (when the matches were still held there) first – a lesson perhaps for those who complain too much of venues that are too far.

When she first started covering football, she couldn’t tell an offside trap from the Venus Fly trap, yet, she has learned to love football (and some of the players have fallen in love with her.)

She asks, “Aaay (that is her trademark), walay football karun? (else I might think, it’s my company she misses, sorry B.)

It is but fitting, that the last report she filed for The freeman, is about football, a sport, she couldn’t understand at first (watching 22 guys chase a ball for 90 minutes gets kind of boring) but has learned to love.

Her name is Sona.