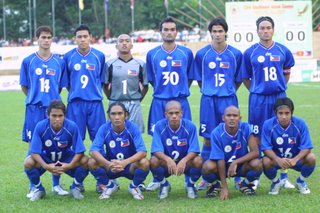 A STRAY dog’s untimely answer to nature’s call propelled the Azkals to a scintillating 1-0 win over Chinese Taipei yesterday in their first game of the Asian Football Confederation Challenge Cup at the Penabenuang Stadium in Bangladesh.

Facing a far more superior team, the Azkals, who are coming off back-to-back losses to Thailand’s senior and Under-23 teams prior to the Challenge Cup, were on the defensive for most of the match, with captain Ali Borromeo providing spectacular defensive plays to stop the opposing strikers.

The Pinoys rarely had a chance at goal in the second half before that fateful 79th minute, when the dog came to play.

Early in the match, the Azkals, which has problems in the opposing side defense, left a man open but his shot hit the bar, unto Borromeo’s head before keeper Ref Cuaresma, a former Southwestern University scooped it safely.

Cuaresma was taxed to the limits of his abilities in the next 30 minutes as he pulled save after save as the wily Chinese offense keep on finding holes in the RP defense.

They used the flanks to attack but instead of crossing into the penalty area – they attacked the Azkals weak spot – the midfield – leading to an incredulous 15 shots at goal just before the half.

Fortunately, Cuaresma was up to the task, pulling hand saves, divers, and in one instant, getting hit in the groin after a shot by Wan Jung Lo ricocheted off Borromeo.

Though it took more than five minutes for Cuaresma to get up, he shrugged it off.

“I used to be a boxer in my high school days and in college I roomed with Malcom Tuñacao, Randy Suico and Rodel Mayol. We had some fights, this is nothing,” he told Cebufootball.blogspot.com in a phone patch interview after the match.

It was the same story in the second half as Chinese Taipei kept on pushing to no avail, forcing coach Aries Caslib to replace strikers Ian Araneta and Luis Brillantes with more defenders to help Borromeo.

“Heck they had nothing to do, I might just as well give them sun block and sun glasses since they just look like they were out to get a tan,” coach Aries Caslib said.

Then the dog came.

It is not sure how get to the venue nor who owned him but in the 79th minute, Chinese Taipei keeper Ako Bud Lat got too bored with the lack of action on his side, that he was seen signaling the dog to come to him.

“There’s a saying in football, goalkeepers are either gay or crazy,” said Chinese Taipei coach Tosikai Tae, who took over the team just two months ago.

“I guess it’s safe to let Bud lat sleep with the rest of the team now,” Tae continued.

In the 79th minute, the dog strutted towards the goal, raised his hind-legs and pissed on the lower right corner of the post, distracting Bud Lat, who in turn approached him.

At the other end of the field, Jung Lo unleashed a shot from 30 yards that hit his teammate, Bay Eng Itlogan, and it bounced toward a bored Leigh Gunn.

Gunn, who seemed to have known the history of the friendly sweeper of Chinese Taipei down to his great-great-great-great grandfather’s classmate’s cousin to the 2nd degree, got the ball and for the first time in the match, took a shot at goal – a hail mary—that sailed past everybody into the empty net, while Bud Lat was stroking the dog.

“I no touch dog, I tell him, I shout him, I push him out! Out! He no listen, that’s why I come near to talk,” an indignant Bud Lat said after the match.

The unexpected goal of Gunn lifted the RP team and the Azkals were able to plug the holes in their defense, it also woke up the lone RP fan in the stadium, Jaime Batan-ongbana.

“Look the word “lucky” in the dictionary and you will find a picture of that dog,” an ecstatic Caslib told mediamen after the match, “In our next game, we will try hard to be good, not to be lucky.”