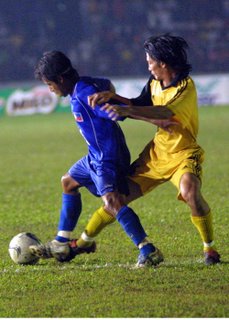 Aside from NCR, which will have Southeast Asian Games veterans Ali Borromeo, Chippy Caligdong and Ian Araneta on its line-up, teams who qualified for this year’s edition are last year’s runner-up, Bacolod City, Masbate, Iligan, Zamboanga, North Cotabato and hosts Iloilo City.

The national championship was first staged in 1911, with the All Manila team winning the first crown.

Caligdong’s inclusion in the NCR line-up is sure to ruffle some feathers as he is one of Iloilo’s most famous football sons. Araneta, who saw limited action in the Seag as he was nursing an injury, is also from Iloilo.

Cebu will not have a representative in the national finals for the second straight year, but University of San Jose-REcoletos’ Heinje Ruiz was picked up to beef Bacolod’s team, along with Dumaguete’s striker, Redrick Viliran.

“We have a good chance of defending our title,” NCRFA president Pocholo Borromeo told Sun.Star in an earlier interview.

Bacolod, who will also have Seag campaigner Arnie Pasenabo in its line-up, will miss the services of former RP team member Joshua Fegidero, who is serving out a one-year suspension.

On the other hand, this year’s surprise team is Zamboanga City, who reportedly have some players who are from the Galatasaray reserves and will also have Mark Villon, another Seag veteran.

Anonymous said…
Can someone confirm that the turkish players really are from Galatasaray and what kind of connection they have to Zamboanga? They also played for them last year.
11:21 PM