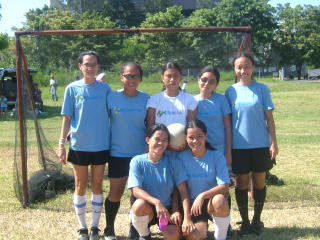 MULBACHS FC defied the odds as it fished out a third-place finish in the 21st Iligan Fiesta Football Festival at the Global Steel Football Field in Iligan City last Sept. 24-25.

Arriving just after noon on the first day, the team had to forego lunch to catch up with the schedule and despite hunger pangs managed to stay undefeated in four matches.

Madille Salina's strike in the fourth had Mulbachs 1-0 over Marawi, while Vasti Morong scored the lone goal in another 1-0 win over Iligan.

Mulbachs ran out of gas in the third game to settle for a 0-0 draw, and Angelica Cabias’ last-minute equalizer had it 1-1 against Cagayan de Oro as it clinched a semifinal spot with eight points.

Mulbachs’ luck, however, ran out in the semis as it lost before regaining composure and outlasted another Cagayan team in a tough shootout in the battle for third, with first-time keeper Salinas coming up with the big plays.

Team captain Angelica Cabias said she was satisfied with her team's performance, considering that engine trouble delayed their boat trip to Cagayan for hours leading to their late arrival on opening day.

They only had seven players with no coach and impressed Iligan FA president Lloyd Lapinig that they earned another invite for another tournament in December.

Anonymous said…
Bullying The Bloggers
The Chinese Communist Party has taken new measures aimed at controlling citizens' access to information through the Internet by slapping controls on bloggers.
Hi, I was just blog surfing and found you! If you are interested, go see my Adware Remover related site. It isnt anything special but you may still find something of interest.
3:03 PM

Anonymous said…
Alacra Adds Newstex Newsfeeds
Alacra, Inc., a provider of online business information solutions, announced the addition of Newstex Newsfeeds to its roster of content sources.
Hi, I am new at this and I’ve been blog surfing for the latest information on ##keyword## and landed on your blog. Obviously I ended up off track somewhere, but I'm certainly glad that I did! I had no idea there are so many neat sites out here. I think my kids were born knowing how to operate computers… but not me! Would you mind if I link to your blog from my "favorites" page?
3:03 PM